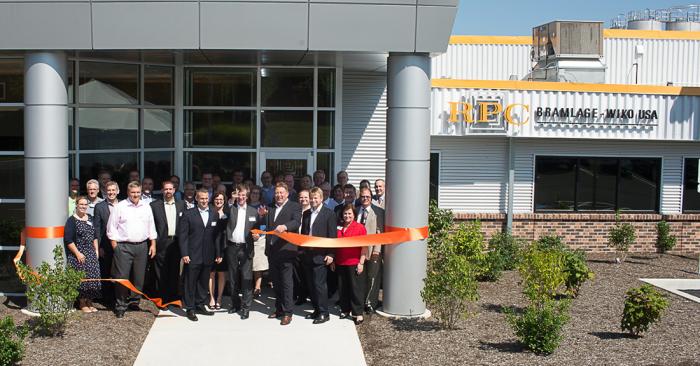 North America, USA, US - The Northeast

A major expansion of its manufacturing facility in Morgantown, Pennsylvania, USA, has seen a near doubling in size of the production area at RPC Bramlage-Wiko to around 120,000 sq ft, following a $10+ million investment. The new facility will enable the site to introduce In-Mould Labelling to its technology portfolio, as well as providing for the growth of existing and new business.

The expanded facility also underlines RPC's commitment to continue to develop its operations outside Europe in order to better support its customers in all areas of the world. In addition to the investment at Morgantown, RPC is also planning to further develop its other US businesses which currently include a manufacturing facility for M&H Plastics in Winchester, Virginia and a sales office for RPC Superfos in Cumberland, Maryland.

"A key focus of our Vision 2020 strategy is to achieve a meaningful presence outside Europe, and supporting and further developing our North American operations is an important part of this.

Morgantown has played a crucial role in our success to date in this market and this additional capacity will further enhance the level of localised support that we can offer our customers in the region."

The extension at Morgantown was officially opened with a special ceremony on September 4th.

Images: RPC Group Chief Executive Pim Vervaat (centre) officially opened the expanded US manufacturing facility in Morgantown.  The $10+ million investment at RPC Bramlage-Wiko USA has seen a near doubling in size of the production area.

Berry Bramlage has unveiled a range of new closure designs that meet forthcoming EU single use plastic legislation. The solutions involve additional strands or tabs on the tamper-evident band that keep the closure attached after opening and enable easy reclosing of the bottle.

Bramlage, a Berry Global company, has launched a portfolio of ‘e-commerce ready’ personal care standard packs to enable customers to benefit from speed-to-market for new product launches. The packs – from the Company’s top-selling Magic Star, Magic SL Twist-Up, Empress, and Empress Light – have all been independently certified by a third-party laboratory.

On July 1st Berry Global Group, Inc. completed the acquisition of RPC Group Plc. RPC and Berry are a natural and synergistic ﬁ t, and the joining of our two companies is truly transformational. The combined company will be able to provide customers with enhanced global value through an expanded wealth of knowledge, innovative technologies, and geographic footprint.

A box of delights

The RPC Bramlage Division has introduced a special Promotion Box that showcases a selection of cosmetic and personal care packaging solutions from its extensive ranges. The box underlines RPC Bramlage’s capabilities in handling a wide variety of product types and also demonstrates how the different pack designs and sizes can be successfully utilised to create a family range.

The RPC Bramlage Division is extending its range of Magic airless dispensers with the introduction of a new design. the top-filled Magic Pur dispenser combines an elegant and modern appearance on-shelf with user-friendly operation, delivering an accurate 1ml of product each time.

The Medipac container range from RPC Astrapak Plastop has been developed to meet the wide-ranging requirements of the prescriptive medicines and wellness supplements markets. With products coming in a variety of shapes and sizes and requiring a multitude of doses, the choice of containers in the Medipac range makes them ideal for all types of tablets, capsules and supplements, and enables brands to maintain continuity, regardless of the dose.

RPC Formatec, part of the RPC Bramlage Division, has extended its range of state-of-the-art inhalers with the introduction of a new optimised breath-actuated pressurised Metered-Dose Inhaler (pMDI). The inhaler’s rounded design with large mouthpiece provides easy handling and maximum comfort for the user.

Dispenser a delight to behold

A strikingly-decorated Twist Up airless dispenser from the RPC Bramlage Division is creating the appropriate on-shelf image and impact for one of Italy’s top-selling and long-established personal care brands. Bionike’s Defence Man Energise revitalising cream-gel and Defence Man Repower anti- ageing serum are being packed in the 50ml Twist Up.

The unique opening experience and positive ecological profile of the Slidissime jar from the RPC Bramlage Division are the key benefits for the new Biotherm Life Plankton Sensitive Balm from L’Oréal. The Slidissime jar format delivers a strong emotional experience for the end-user, in particular the Wow effect, and provides the perfect e-commerce packaging solution.

This 360 photo clearly showcases the innovative concept developed by RPC Bramlage Division for Kerrygold, one of Europe's best-loved brands of butter. The pack emulates a traditional glass or china butter dish, ready to be set down on a kitchen counter and used by the whole family as a spread or for cooking.

Reusable jar is a natural solution for Chuckling Goat

The high-quality construction and on-shelf appeal of the RPC Bramlage Division’s Empress and Diamond jar ranges have provided the ideal solution for a range of premium skincare products from leading manufacturer La mer Cosmetics AG. Both the 50ml Empress and 15ml Diamond jars have been selected for La mer’s Advanced Skin Refining and Med Stress Balance creams.

RPC Bramlage Beauté, part of the RPC Bramlage Division, has introduced an innovative and versatile standard make-up stick, ideal for a wide variety of products such as eyeshadow, lipstick, lipcare and solid perfume.

The new Nova tablet dispenser from RPC Bramlage Velky Meder, part of the RPC Bramlage Division, offers a stylish and user-friendly solution that meets the highest demands of consumers.

RPC Formatec, part of the RPC Bramlage Division, has launched a new inhaler that delivers enhanced levels of patient convenience, comfort and safety.

As part of the global relaunch of the KMS Hair start.style.finish professional range for salons, RPC Zeller Plastik Germany, part of the RPC Bramlage Division, is supplying new bespoke closure solutions to underline the global style of the new style-prepping shampoos, conditioners and treatments.

RPC dispenser is the natural choice for Yun Probiotherapy

The packaging for the latest Emporio Armani fragrances - Because It's You for women and Stronger With You for men – features a stylish cap from RPC Bramlage Marolles that reflects the quality and premium image of this iconic brand, while offering convenience and ease of use for the consumer.

The RPC Bramlage Division has introduced a new premium cosmetic jar into its standard collection, which is ideal for facial care products. The Coral jar provides an alternative to the traditional cylindrical shape, with an innovative raised section at the base.

RPC Bramlage has launched a lotion pump that combines a standard system with a customisable outer body. The Lotus pump delivers excellent functionality and user-friendly operation for a wide variety of cosmetic and personal care products while enabling manufacturers to create an individual appearance for effective brand identity and maximum on-shelf appeal.

Small is beautiful for new closure

The latest Ecosolution high viscosity pump from RPC Bramlage offers the benefits of effective product protection, efficient evacuation and single material construction to provide one of the most sustainable airless pump solutions on the market.

RPC Bramlage will underline its pre-eminent position as a supplier of innovative packaging solutions for the cosmetic and personal care market with the launch of a new lotion pump at Cosmoprof. The new Lotus lotion pump utilises RPC Bramlage’s 30 years’ experience in dispensing, and in-depth knowledge of market requirements to create a standard pump with a customisable outer body, including a choice of surface finishes and decoration effects.

A stylish cap produced by RPC Bramlage using advanced injection moulding technology is providing the ideal complement to the eye-catching bottle for Roma Passione, a new fragrance inspired by the city of Rome from leading Italian fashion designer Laura Biagiotti.

A new airless pump from RPC Bramlage is offering numerous benefits including a large dose and ease of use. The XL5 has been designed for a variety of professional applications such as spa and hair care, but is equally suitable for larger family size or promotional packs for body care and other personal care products.

RPC Bramlage’s innovative Slidissime Airless Jars have been selected by leading French organic cosmetic manufacturer Nature.cos for its high quality skincare brand L’Atelier des Délices. The Slidissime jar is being used for the new Premium products, meeting Nature.cos's requirements for a superior quality jar that provides both airless protection and hygienic use.